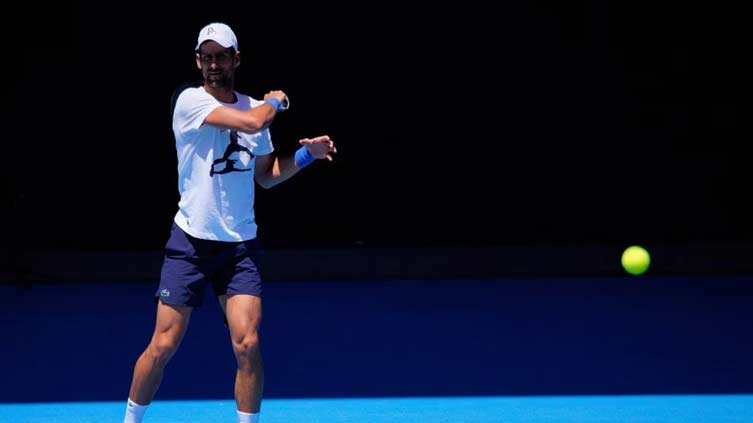 Novak Djokovic made his way to Melbourne for the Australian Open unsure about the reception he would receive after being deported before last year’s Grand Slam over his unvaccinated status, but forgiving fans said the nine-times champion was welcome again.

The 35-year-old was forced to return home to Serbia and miss last year’s major for not taking his Covid-19 shots. He received a three-year travel ban for the country, which was waived in November and cleared the way for his return.

Djokovic’s attempts to compete with a medical exemption last year enraged Australians who had endured tough lockdowns, with a January 2022 poll by the News Corp media group showing 83% of them favoured his deportation.

But 12 months on, fans at Melbourne Park said that they were willing follow the lead of their Adelaide counterparts, who gave Djokovic a rousing reception throughout his title run in a warm-up tournament.

“He’s one of the best players in the world, so I’m glad he’s going to be here to see what happens and see how competitive we can make the whole Australian Open. But I’m cheering for Rafa Nadal all the way.”

Australian Open organisers have said any fans targeting Djokovic, who begins his quest for a 22nd Grand Slam to match Nadal against Roberto Carballes Baena on Tuesday, would be slapped with potential tournament bans.

But local supporter Louise Bielinski believes the crowd will only be respectful.

“I think they’ll be great,” Bielinski said. “I think everyone just respects him as a tennis player. Regardless of what happened. Just move on.”

Raducanu under more pressure than me, says Gauff 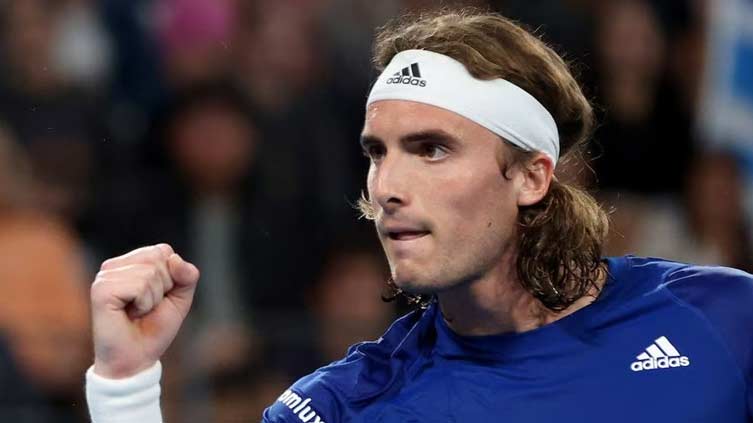 Stefanos Tsitsipas will become Greece’s first Grand Slam champion and a world number one if he wins the Australian Open final on Sunday — he will have his father to thank if he does.

There are not many athletes whose careers and outlooks have been forged by near-death experiences, but the 24-year-old world number four is an exception.

In 2015, while taking part in a third-tier event in Crete, a teenage Tsitsipas and a friend went swimming and almost fatally misjudged the strength of the currents.

“We couldn’t breathe, I felt awful to be inside the water and was terrified. I didn’t know how all this was going to end,” Tsitsipas once recalled.

“My father saw us from afar and he jumped in, started swimming towards us and pushed us towards the beach. I was just a few breaths away from dying.

“If we were supposed to die and lose our lives that day, we would have to do it together. My father was a hero.

“That was the day I saw life with a different perspective. I remember after that how much psychologically it changed me.”

Tsitsipas shares the same birthday as Pete Sampras — August 12 — and is studious, contemplative.

He speaks Greek, English and Russian, and has dabbled in Spanish and Chinese.

Sport is in his genes. Life-saving Apostolos is his coach while mother Julia Salnikova is an ex-tennis pro.

His grandfather, Sergei Salnikov, was a 1956 Olympic gold medallist in football playing for the Soviet Union.

Since turning pro in 2016, Tsitsipas’s career has been on a steadily upward curve.

By the time he was 21 he had already swept wins over the sport’s three biggest beasts — Novak Djokovic, Rafael Nadal and Roger Federer.

Tsitsipas was the first Greek man to win a tour title and has claimed nine in total, but a Grand Slam crown has remained elusive.

He hopes that will change when he faces Djokovic in Sunday’s Australian Open final. Victory would also make him world number one for the first time.

His only previous major final was in 2021 when he came agonisingly close to the French Open crown, racing into a two-set lead in the final over Djokovic before the Serb mounted an epic comeback to claim victory.

His biggest win to date came while he was still 21. He captured the 2019 season-ending ATP Finals title, becoming the youngest champion since Lleyton Hewitt in 2001.

Blond-haired and standing 6ft 4ins (1.93m) tall, Tsitsipas has long been touted as a possible heir to Djokovic, Nadal and Federer.

He comes across as one of tennis’s more rounded players, but he can be feisty too.

He has developed an intriguing rivalry with Daniil Medvedev, another coming up fast behind the “Big Three”.

The Russian once described Tsitsipas’s game as “boring”.

Tsitsipas branded Medvedev an “(expletive) Russian” in a fiery encounter in Miami.

His Melbourne opponent Djokovic, no stranger to controversy himself, is a fan.

“He is a hard worker, dedicated, nice guy,” the Serb once said.

“He’s very smart and wise. I love the fact that he is more than just a tennis player and he’s always looking to learn from experience and to understand something new about himself.

“That’s the trait of a champion, of someone who has great potential to be number one in the world and win Slams and be a great ambassador for the sport.” 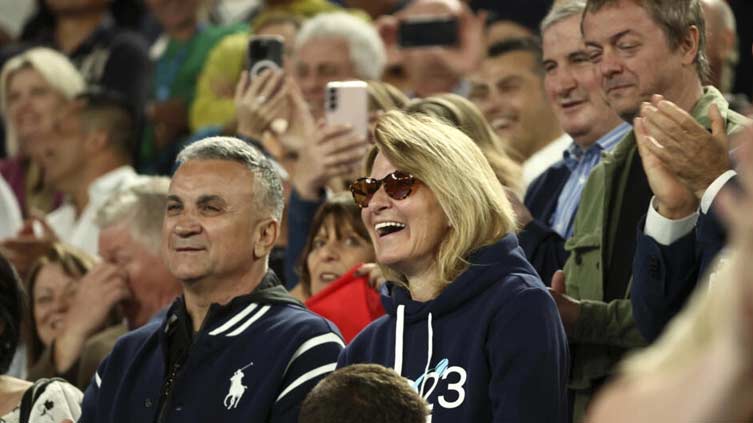 It follows a video posted on a pro-Russian YouTube account showing Djokovic’s father Srdjan posing in Melbourne Park with a fan holding a Russian flag that featured the face of Vladimir Putin.

It sparked a backlash from Ukraine and led to calls for Djokovic senior to be banned from the tournament.

He decided to skip his son’s semi-final victory on Friday and it remains to be seen if he will be at Sunday’s final.

Tiley told the Melbourne Age newspaper he had spent “a fair amount of time talking to the Djokovic family”.

“My advice is that you have to be really careful because if this is an event of global significance, it’s a platform,” he said he told them.

“When you have hundreds of thousands of people come through the gate, you’re going to naturally have some people that are coming here with an intention to be disruptive, and don’t get yourself caught in the middle of that.

“And they completely understand that,” he added. “The family were very good. They were upset that it was taken that way. There was no intention of it.

“His dad particularly does not support war and they’re very focused on supporting peace.”

Serbian star Djokovic insisted after his semi-final win there had been a “misinterpretation” of the images and his father had “no intention whatsoever to support any war initiatives”.

He said his father had been greeting fans outside Rod Laver Arena after every match and had been “misused” on Wednesday night.

Tiley said the Open had more than 1,000 accredited journalists and growing TV audiences and “it does become a platform and that’s new for us. It never used to be like that”.

Since Russia’s invasion of Ukraine last year, Russian and Belarusian players have normally competed under a neutral white flag as independents, as is the case at the Australian Open.

Spectators have been banned from having Russian or Belarusian flags at the Grand Slam after Ukraine’s ambassador to Australia and New Zealand demanded action when they were seen among the crowd early in the tournament. 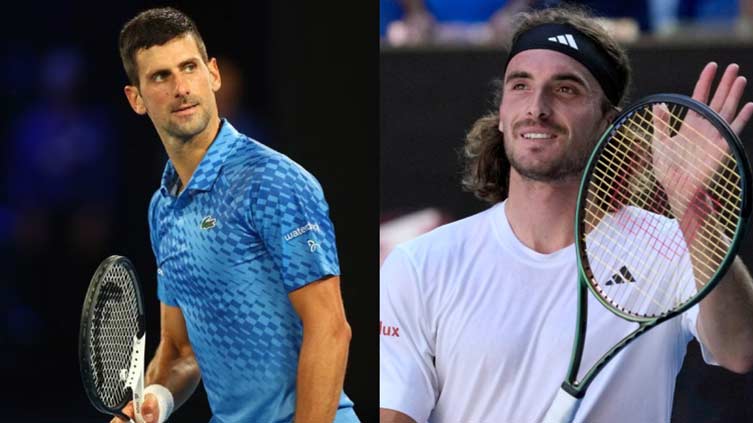 Novak Djokovic will look to rise above the drama that has engulfed him at Melbourne Park and claim a record-extending 10th Australian Open title on Sunday in a generational clash against Stefanos Tsitsipas.

A year after being deported from Australia on the eve of the Grand Slam for lacking Covid-19 vaccination, Djokovic has battled a hamstring strain, heckling spectators and a media storm over his father mixing with fans toting banned Russian flags at the tennis.

In handling everything within his control, though, Djokovic has been supreme.

The Serb’s dominant semi-final victory over American Tommy Paul on Friday stretched his winning streak at the event to a record 27 in the professional era, eclipsing Andre Agassi’s 26-match run between 2000 to 2004.

Never beaten at Melbourne Park after reaching the semis, fourth seed Djokovic is rated an unbackable favourite to triumph again under the floodlights at Rod Laver Arena.

Despite that, the decider presents possibly the best matchup fans could have hoped for following the early exit of injured champion Rafa Nadal.

It offers a rematch of the dramatic 2021 French Open final, in which Djokovic came back from two sets down to snatch the title and leave Greek Tsitsipas heartbroken.

Not that the match was fresh in Djokovic’s memory.

“I think he (Tsitsipas) has never played a (Grand Slam) finals, am I wrong?” Djokovic asked incredulous reporters this week.

The stakes are sky-high for both players.

At 35, Djokovic needs one major title to draw level with 36-year-old Nadal’s 22 in the all-time Grand Slam race. Meanwhile third seed Tsitsipas is desperate to become the first Greek to win a Grand Slam crown, having put the nation on the tennis map.

Whoever wins will take the world number one ranking from Spain’s Carlos Alcaraz, who missed the tournament through injury.

At 24, Tsitsipas may feel his time has come. He buried his semi-final hoodoo at Melbourne Park against Russian bruiser Karen Khachanov in four sets on Friday after falling three times previously at the hurdle.

“These are the moments I’ve been working hard for,” said Tsitsipas.

“To be able to play in finals that have a bigger meaning than just the final.”

The atmosphere promises to be electric, and possibly volatile as tension builds.

Melbourne’s strong Greek community, the most populous outside Greece itself, will be in full voice at Rod Laver Arena.

They will rival the army of Serbian supporters who have gorged on Djokovic’s success since his first title at Melbourne Park as a 20-year-old in 2008.

Neutral fans, meanwhile, could well rally behind Tsitsipas in the hope of seeing a genuine contest.

With a huge serve, thumping groundstrokes and comfort on all areas of the court, Tsitsipas has the weapons to trouble anyone on tour. Whether he has the endurance and mental fortitude to dislodge iron man Djokovic remains to be seen.

For all the huff and puff of the younger generation, only Daniil Medvedev has managed to beat the Serb in a completed match at a hardcourt Grand Slam since a shock fourth round loss to Chung Hyeon in the 2018 Australian Open.

Not even Nadal or retired great Roger Federer have ever bested Djokovic in a final at Melbourne Park, and the Serb is hell-bent on extending that incredible record.

“Of course, I have professional goals and ambitions. Those are Grand Slams and being number one in the world,” said Djokovic.

“So I do want to make more history of this sport, no doubt.”