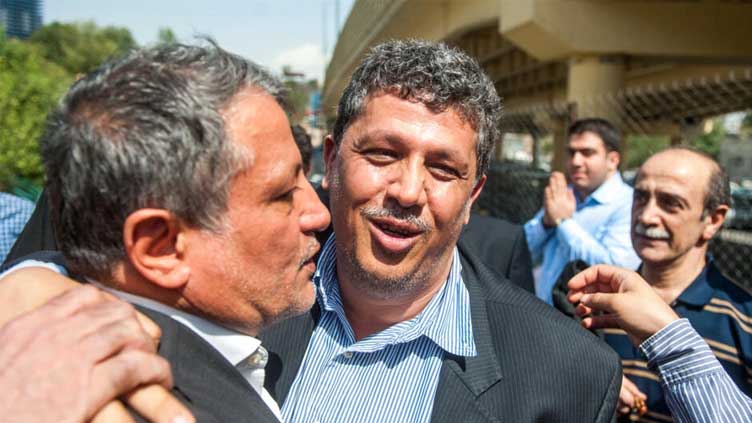 A son of former Iranian president Akbar Hashemi Rafsanjani has been freed after serving more than seven years of a 10-year jail sentence for fraud, Iranian media reported Wednesday.

Hashemi was convicted of fraud, embezzlement and undermining national security in August 2015, charges he had previously denounced as “politically motivated”.

He had served as a senior official in Iran’s oil sector in the mid-2000s, a period when Norway’s Statoil and French energy company Total were suspected of paying bribes to obtain access to the Islamic republic’s hydrocarbon reserves.

In 2018, a Paris criminal court found Total guilty of “corruption of a foreign public agent” for payments made to Hashemi for help in securing rights to the huge South Pars offshore gas field which Iran shares with Qatar in the Gulf.

In 2009, Hashemi aroused the anger of conservatives by forming a “vote protection committee” for that year’s presidential election.

Mehdi’s father, Akbar Hashemi Rafsanjani, served as president from 1989 to 1997 and was regarded as a moderate who supported improving ties with the West.

Earlier this month, Rafsanjani’s daughter Faezeh Hashemi was sentenced to five years in prison for “collusion against the security of the country”.

She was arrested in September and convicted of inciting Tehran residents to join protests over the death in custody of Mahsa Amini, a 22-year-old Iranian Kurd, who had been arrested for allegedly violating Iran’s strict dress code for women. 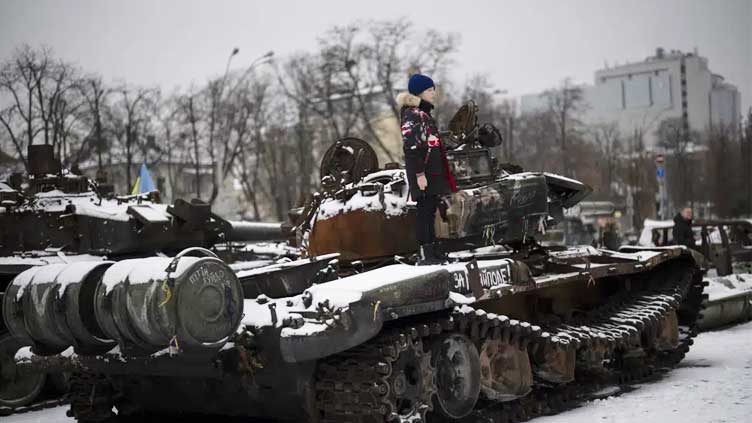 Ukraine’s push for fighter jets to help beat back Russia’s invasion force risks straining the unity of Ukraine’s Western allies, amid fears that the move could escalate the nearly year-long conflict and draw them deeper into the war.

Ukrainian Defense Minister Oleksii Reznikov was due in Paris Tuesday where discussions about the possible delivery of fighter jets to Ukraine was expected to be on the agenda.

Kyiv officials have repeatedly urged allies to send jets, saying they are essential to challenge Russia’s air superiority and to ensure the success of future counteroffensives that could be spearheaded by tanks recently promised by Western countries.

There was no indication that a decision on warplanes to Ukraine might come any time soon and no sign that Western countries have changed their earlier stance on the issue. Ukraine’s allies also have ruled out providing Kyiv with long-range missiles able to hit Russian territory, signaling a similarly cautious stance on warplanes.

Both Ukraine and Russia are believed to be building up their arsenals for an expected offensive in coming months. The war has been largely deadlocked on the battlefield during the winter.

Asked about Lithuania’s call for Western countries to provide Ukraine with fighter jets and long-range missiles, Kremlin spokesman Dmitry Peskov said the comments “reflected an aggressive approach taken by the Baltic nations and Poland, who are ready to do everything to provoke further escalation without thinking about consequences.”

“It’s very sad that the leaders of big European countries that drive the European agenda don’t fulfill a balancing role to offset such extremist inclinations,” Peskov said in a conference call with reporters.

French President Emmanuel Macron said Monday that France doesn’t exclude sending fighter jets to Ukraine, but he laid out multiple conditions before such a significant step is taken.

The conditions, he said, include not leading to an escalation of tensions or using the aircraft “to touch Russian soil,” and not resulting in weakening “the capacities of the French army.”

He also said Ukraine must also formally request the planes, something that could happen when Reznikov sits down for talks in Paris.

After months of haggling, Ukrainian authorities last week persuaded Western allies to send the tanks. That decision came despite the hesitation and caution of some NATO members, including the United States and Germany.

Chancellor Olaf Scholz appeared to balk at the prospect of providing fighter jets, suggesting Sunday that the reason for the entire discussion might be down to “domestic political motives” in some countries.

Dutch Prime Minister Mark Rutte said Monday there are “no taboos” in efforts to help Ukraine. But he added that sending jets “would be a very big next step.”

As in previous debates about how to help Ukraine, Poland is a leading advocate in the European Union for providing military aid. Poland, Slovakia and the Baltic countries on NATO’s eastern flank feel especially threatened by Russia.

NATO-member Croatia’s president, meanwhile, criticized Western nations for supplying Ukraine with heavy tanks and other weapons. President Zoran Milanovic argued that those arms deliveries will only prolong the war.

Earlier in the conflict, discussions focused on the possibility of providing Kyiv with Soviet-made MiG-29 fighter jets that Ukrainian pilots are familiar with. In March, the Pentagon rejected Poland’s proposal to transfer its MiG-29 fighter jets to Kyiv through a U.S. base in Germany, citing a high risk of triggering a Russia-NATO escalation.

Western warplanes would offer Ukraine a major boost, but countering Russia’s massive air force would still be a major challenge.

Switching to Western aircraft would require Ukrainian crews to undergo long training and would also raise logistical challenges linked to their maintenance and repair.

Russia methodically targeted Ukrainian air bases and air defense batteries in the opening stage of the conflict, but Ukraine has been smart about relocating its warplanes and concealing air defense assets, resulting in Russia’s failure to gain full control of the skies.

After suffering heavy losses early during the conflict, the Russian air force has avoided venturing deep into Ukraine’s airspace and mostly focused on close support missions along the frontline.

The Ukrainian air force faced similar challenges, trying to save its remaining warplanes from being hit by Russian fighter jets and air defense systems. 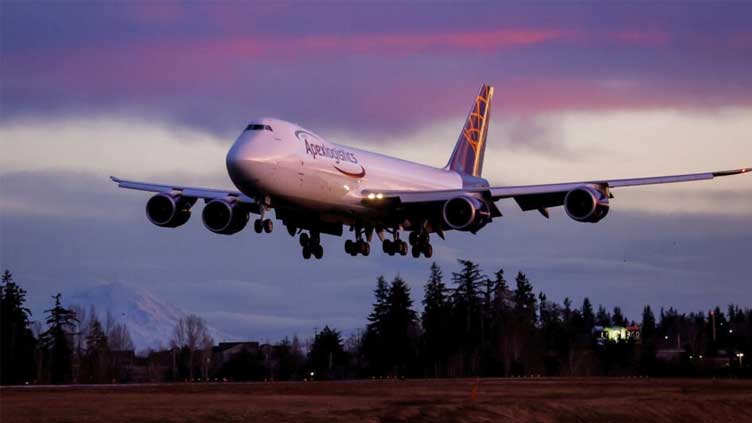 Since its first flight in 1969, the giant yet graceful 747 has served as a cargo plane, a commercial aircraft capable of carrying nearly 500 passengers, a transport for NASA‘s space shuttles, and the Air Force One presidential aircraft. It revolutionized travel, connecting international cities that had never before had direct routes and helping democratize passenger flight.

But over about the past 15 years, Boeing and its European rival Airbus have introduced more profitable and fuel efficient wide-body planes, with only two engines to maintain instead of the 747′s four. The final plane is the 1,574th built by Boeing in the Puget Sound region of Washington state.

A big crowd of current and former Boeing workers is expected for the final send-off. The last one is being delivered to cargo carrier Atlas Air.

“If you love this business, you’ve been dreading this moment,” said longtime aviation analyst Richard Aboulafia. “Nobody wants a four-engine airliner anymore, but that doesn’t erase the tremendous contribution the aircraft made to the development of the industry or its remarkable legacy.”

Boeing set out to build the 747 after losing a contract for a huge military transport, the C-5A. The idea was to take advantage of the new engines developed for the transport — high-bypass turbofan engines, which burned less fuel by passing air around the engine core, enabling a farther flight range — and to use them for a newly imagined civilian aircraft.

It took more than 50,000 Boeing workers less than 16 months to churn out the first 747 — a Herculean effort that earned them the nickname “The Incredibles.” The jumbo jet’s production required the construction of a massive factory in Everett, north of Seattle — the world’s largest building by volume.

The plane’s fuselage was 225 feet (68.5 meters) long and the tail stood as tall as a six-story building. The plane’s design included a second deck extending from the cockpit back over the first third of the plane, giving it a distinctive hump and inspiring a nickname, the Whale. More romantically, the 747 became known as the Queen of the Skies.

Some airlines turned the second deck into a first-class cocktail lounge, while even the lower deck sometimes featured lounges or even a piano bar.

“It was the first big carrier, the first widebody, so it set a new standard for airlines to figure out what to do with it, and how to fill it,” said Guillaume de Syon, a history professor at Pennsylvania’s Albright College who specializes in aviation and mobility. “It became the essence of mass air travel: You couldn’t fill it with people paying full price, so you need to lower prices to get people onboard. It contributed to what happened in the late 1970s with the deregulation of air travel.”

The first 747 entered service in 1970 on Pan Am’s New York-London route, and its timing was terrible, Aboulafia said. It debuted shortly before the oil crisis of 1973, amid a recession that saw Boeing’s employment fall from 100,800 employees in 1967 to a low of 38,690 in April 1971. The “Boeing bust” was infamously marked by a billboard near the Seattle-Tacoma International Airport that read, “Will the last person leaving SEATTLE — Turn out the lights.”

An updated model — the 747-400 series — arrived in the late 1980s and had much better timing, coinciding with the Asian economic boom of the early 1990s, Aboulafia said. He recalled taking a Cathay Pacific 747 from Los Angeles to Hong Kong as a twentysomething backpacker in 1991.

“Even people like me could go see Asia,” Aboulafia said. “Before, you had to stop for fuel in Alaska or Hawaii and it cost a lot more. This was a straight shot — and reasonably priced.”

Delta was the last U.S. airline to use the 747 for passenger flights, which ended in 2017, although some other international carriers continue to fly it, including the German airline Lufthansa.

Boeing’s roots are in the Seattle area, and it has assembly plants in Washington state and South Carolina. The company announced in May that it would move its headquarters from Chicago to Arlington, Virginia, putting its executives closer to key federal government officials and the Federal Aviation Administration, which certifies Boeing passenger and cargo planes.

Boeing’s relationship with the FAA has been strained since deadly crashes of its best-selling plane, the 737 Max, in 2018 and 2019. The FAA took nearly two years — far longer than Boeing expected — to approve design changes and allow the plane back in the air. 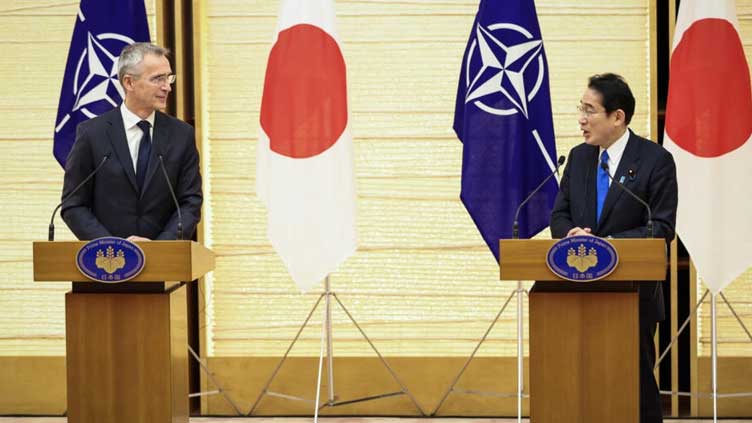 Japan and NATO must “remain united and firm” in the face of security threats posed by China, North Korea and Russia’s war in Ukraine, Jens Stoltenberg said Tuesday in Tokyo.

Stoltenberg, secretary general of the European and North American military alliance, warned that Beijing was keeping a close eye on developments in Ukraine and “learning lessons that may influence its future decisions”.

He spoke alongside Japan’s Prime Minister Fumio Kishida after the pair held talks as part of a trip to Asia by Stoltenberg aiming to boost ties with democratic allies.

“What is happening in Europe today could happen in East Asia tomorrow. So we must remain united and firm, standing together for freedom and democracy,” he said.

Stoltenberg and Kishida said they were worried by the increasing cooperation they saw between China and Russia.

“We highlight with concern Russia’s growing military cooperation with China, including through joint operations and drills in the vicinity of Japan,” they said in a joint statement.

The previous day in Seoul, Stoltenberg asked South Korea to step up military support for Ukraine, which was invaded by its neighbour Russia nearly a year ago.

But on Tuesday, he praised the “strong position” and “substantial support” offered to Ukraine by Japan.

Tokyo has imposed sanctions on Moscow along with its G7 partners, and has taken the rare steps of sending defensive equipment and offering refuge to those fleeing the conflict.

He said China was “not our adversary” but warned of its growing military presence in Asia “including nuclear weapons, bullying neighbours and threatening Taiwan”, as well as spreading disinformation about NATO and Ukraine.

Kishida said Japan would establish an independent representative office for its dealings with NATO as part of efforts to deepen ties.

The country will also consider regular participation in high-level meetings held by the alliance, Kishida added.

In December, Japan announced its largest shake-up to its defence and security strategy in decades.