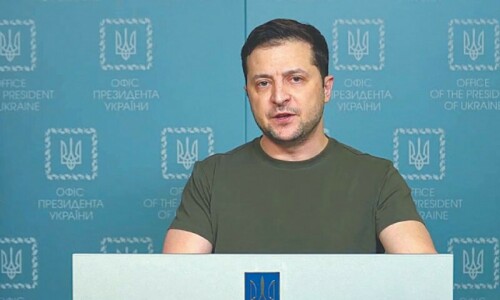 In an address to the World Economic Forum in Davos by videolink, the Ukrainian leader issued a “call for speed” in a barely veiled reference to hesitation in Germany about whether to supply heavy Leopard tanks to the country.

“The time the Free World uses to think is used by the terrorist state to kill,” Zelensky said ahead of a meeting of Ukraine’s Western arms suppliers in Germany on Friday (tomorrow).

Meanwhile, German Chancellor Olaf Scholz promised support for Ukraine for “as long as necessary”, but without mentioning tanks, in his speech at the Davos forum earlier in the day.

European allies have implored the German chancellor to agree to the export of Leopard heavy tanks to help Ukraine repel Russia’s invasion.

Leaders and ministers from Finland, Lithuania, Poland and Britain have added their voices in recent days to a growing clamour for Berlin to approve the export of German-made Leopards to Ukraine.

Polish President Andrzej Duda, whose country has offered to send its Leopards, called it a “very, very, very good idea” on Tuesday.

“I hope it will be very positive for Ukraine. Unofficially, I have very good and positive signals,” Kyiv mayor Vitali Klitschko said on Wednesday about the Friday meeting.

With the pressure rising, some had expected an announcement during Scholz’s speech at the World Economic Forum, a day after several EU leaders pushed for a decision at the same event.

But Scholz made no reference to tanks, simply insisting that Germany was “continuously supplying Ukraine with large quantities of arms, in close consultation with our partners”.

After the speech, Scholz was asked directly about Germany’s continued hesitancy on the issue.

But while listing weapons from Iris-T air defence systems to multiple rocket launchers to Marder armoured vehicles, he pointedly failed to mention the sought-after Leopards.

Instead, he repeated that “we are not just supporting Ukraine with humanitarian aid but also with a lot of weapons”.

“We are never doing something just by ourselves, but together with others, especially the United States,” he added.

Germany has been repeatedly criticised for its reluctance to send weapons to Ukraine since the start of the conflict.

The issue will be one of the most pressing in the in-tray of newly appointed Defence Minister Boris Pistorius, who took the post on Tuesday.

The Ukrainian president has written a letter to Chinese leader Xi Jinping inviting him to talks. The letter was handed over in Davos to the Chinese delegation, his wife Olena Zelenska said.

Zelensky has repeatedly sought to make contact with Xi since Russia’s invasion in the hope that Beijing would use its influence over Russian leader Vladimir Putin.

During a speech on Tuesday at the World Economic Forum, Zelenska said she had a letter for Xi, but she gave new details during a press conference on Wednesday.

‘He’s close to us’: Wheelchair users in Africa await pope 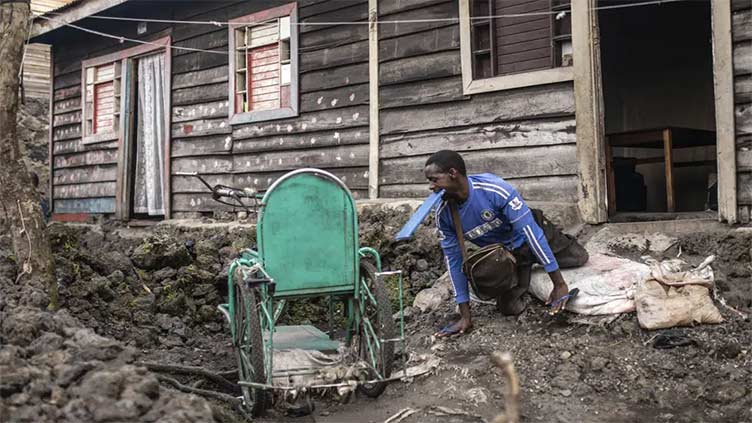 When Pope Francis arrives in Congo and South Sudan next week, thousands of people will take special note of a gesture more grounded than the sign of the cross. Watching from their wheelchairs, they will relate to the way he uses his.

The pope, who began using a wheelchair last year, is visiting two countries where years of conflict have disabled many, and yet they are among the world’s most difficult places to find accessibility and understanding. His visit is heartening Catholics and non-Catholics alike.

“We know that it’s a suffering, but it also comforts us to see a grand personality like the pope using a wheelchair,” said Paul Mitemberezi, a market vendor in Goma, at the heart of the eastern Congo region threatened by dozens of armed groups. “Sometimes it gives us the courage to hope that this isn’t the end of the world and one can survive.”

Mitemberezi, a Catholic and a father, has been disabled since he was 3 because of polio. He works to support his family because he can’t imagine a life of begging. On the way to market, his three-wheeled chair crunches the stones of unpaved roads. Without a ramp at home, he must leave the brightly painted vehicle outdoors, at risk of theft.

Every morning, before he leaves for basketball practice, he makes sure the chair’s still there before crawling out his front door. “It is my legs, which helps me to live,” he said. He applies a bicycle pump to the wheels and is off, weaving through traffic of motorcycles and trucks.

Pope Francis is still adjusting to a life that Mitemberezi has long accepted. The pope was first seen publicly in a wheelchair in May, with an aide pushing it. The pope, at age 86, never propels himself. Sometimes he walks with a cane, but he uses the chair for longer distances and has a wheelchair lift to get on and off planes.

Francis has insisted that his mobility limitations don’t affect his ability to be pope, saying “You lead with your head, not your knee.” He has lamented how today’s “throwaway culture” wrongly marginalizes disabled people. He makes it a point to visit places serving the disabled during his foreign trips, and routinely spends time greeting wheelchair users at the end of his general audiences.

“No disability — temporary, acquired or permanent — can change the fact that we are all children of the one Father and enjoy the same dignity,” Francis wrote in his annual message for the U.N. International Day of Persons with Disabilities in December. He said people with different abilities enrich the church and teach it to be more humane.

Such messages are warmly awaited by wheelchair users in South Sudan, where a five-year civil war killed hundreds of thousands of people. As in Congo, data is lacking on just how many people are disabled by conflict or other means.

While the road leading to the Vatican’s embassy in the South Sudan capital, Juba, was paved by city authorities this month for ease of travel, residents who use wheelchairs said they have long gone without easy access to schools, health centers, toilets and other public facilities.

South Sudan, unlike Congo, is yet to ratify the U.N. Convention on the Rights of Persons with Disabilities. Both countries, however, face vast challenges including underfunded health systems, poor infrastructure and conflicts that leave many disabled people vulnerable as others flee.

Even displacement camps and shelters often are not accessible, the United Nations has said, and wheelchairs are not always available.

Discrimination is another problem. “People see those who get around using a wheelchair as useless,” said James Moses, who leads a local organization in South Sudan for disabled people and uses crutches after being wounded by a land mine.

He and others called on South Sudan’s government to give them special consideration during the pope’s visit, and they hope that Francis will advocate for them. “He’s close to us,” said Susan Samson, a wheelchair user and mother.

They hope they will have a chance to greet the pope at the airport with congratulatory messages and flowers. ”Put us in front so the pope will see us,” urged wheelchair user Seme Lado Michael.

The Vatican’s ambassador to Congo, Archbishop Ettore Balestrero, said he believed the sight of a wheelchair-using pope could be a powerful teaching moment in a culture where disabilities are often viewed with suspicion and superstition.

Seeing someone like the pope suffer should make Francis more approachable for people during his visit, Balestrero said. “They identify, in a way, even more with him.” 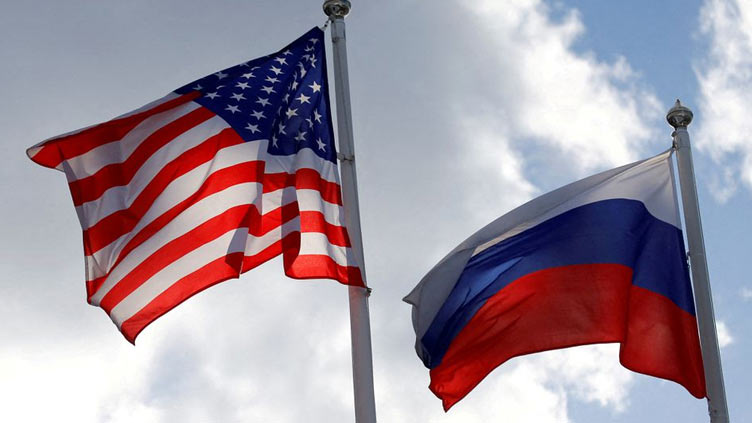 Tracy arrived in Moscow earlier this week. Russian Foreign Ministry spokeswoman Maria Zakharova said on Friday that the new U.S. ambassador would not improve ties between the two countries because of what she called Washington’s ongoing “hybrid war” against Russia.

Relations between Washington and Moscow have been at rock bottom since Russia’s invasion of Ukraine last February. Russia casts the war as confronting what is says is an aggressive and expansionist U.S.-led NATO alliance, while Kyiv and its allies call Russia’s actions an unprovoked land grab.

According to Ryabkov, the traditional presentation of copies of credential by Tracy is already agreed upon.

“It will take place literally at the beginning of the week. It is expected that the transfer of copies of credentials by Ambassador Tracy will be made to me,” he said. 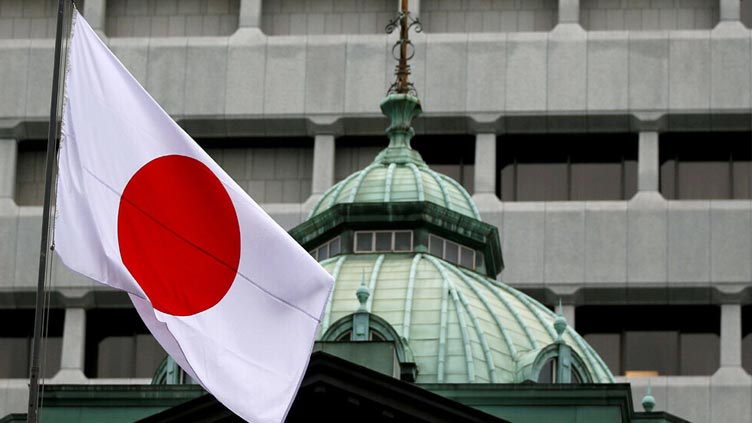 Japan is considering relaxing controls on exports to South Korea as its president, Yoon Suk-yeol, seeks to improve ties amid a strained East Asian security environment, the Sankei newspaper reported on Saturday.

Japan will decide whether to ease the curbs on shipping high-tech materials, which it imposed in 2019 over a dispute about Japan’s wartime forced labour of Korean workers, as the neighbours hold a series of talks aimed at solving the dispute, Sankei said, citing unidentified government sources.

Japan’s foreign ministry and trade ministry officials were not immediately available for comment on the report when Reuters contacted them outside regular business hours.

The issue of the export curbs would likely be resolved during consultations between South Korea and Japan on various issues including forced labour, South Korea’s foreign ministry said in a statement.

“Given the growing need to promote cooperation among countries sharing universal values at a time when the importance of economic security is increasing, we hope that Japan will judge wisely,” the South Korean ministry said.

Foreign ministers of the two countries met for talks in Tokyo this month. Their diplomatic officials are due to meet on Monday in the South Korean capital, Seoul, as they near a conclusion of a plan for the resolving their dispute, Jiji news reported on Friday.

The East Asian neighbours, both important U.S. allies, share a bitter history dating to Japan’s colonisation of the Korean peninsula from 1910 to 1945.

Yoon, who became South Korea’s leader in May last year, has also made increasing cooperation with Japan a core goal despite the lingering disputes.